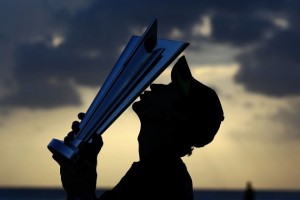 Five World T20 tournaments have so far been played and no team has won the tournament more than once.

The World T20 (officially the ICC World Twenty20 and often erroneously called the T20 World Cup) is the international championship of Twenty20 cricket of the International Cricket Council (ICC).

The event has generally been held every two years and, except for the first World T20 in 2007, in non-World Cup years. However, according to the ICC’s current future tours programme, there will be a four-year gap between the next two scheduled tournaments – the current one in India and 2020 in Australia.  (Footnote:  Another example of the Big Three’s heist of world cricket..?)

Five tournaments have so far been played and no team has won the tournament more than once. The inaugural event was staged in South Africa and won by India, defeating Pakistan in the final at the Wanderers.  The 2009 tournament took place in England.  This time Pakistan went one better and defeated Sri Lanka in the final at Lord’s.  The third tournament in 2010 was hosted in the Caribbean.  England defeated Australia in the final at the Kensington Oval in Barbados.  In 2012 the tournament was hosted in Asia for the first time, with all matches played in Sri Lanka.  The West Indies were crowned champions by defeating the hosts in the final.  The fifth World T20 in 2014 was held in Bangladesh.  Sri Lanka became the first team to play in three finals and promptly made it third time lucky by easily defeating India.

This year the tournament takes place in India for the first time. A total of sixteen teams will participate, comprising all ten ICC full members and six associate or affiliate members chosen from a qualifying tournament held in Ireland and Scotland in July last year.

The tournament is divided into two sections: A group stage and a Super 10 stage.  The group stage started on 8 March.  There are eight teams in this section of the tournament:  Full members Bangladesh and Zimbabwe (because they were not one of the top eight teams in the ICC T20I rankings on the cut-off date, 30 April 2014), as well as Ireland, Scotland, Afghanistan, Netherlands, Hong Kong and Oman.  The top two teams from the group stage, which ends on 13 March, go through to the Super 10 stage.

The Super 10 stage is the World T20 proper. The aforementioned two teams will join the top eight teams in the world as at 30 April 2014 for this section of the tournament.  The ten teams are divided in two groups of five and each team plays four matches.  The top two teams in each group contest the semi-finals.  The Super 10 stage kicks off with an India / New Zealand clash in Nagpur on 15 March and culminates in the final at Eden Gardens in Kolkata on 3 April.

The Proteas start their campaign on 18 March in Mumbai against the 2010 champions, England. That is followed by games against one of the group stage qualifiers, the West Indies and defending champions, Sri Lanka.

Six games stand between South Africa and World T20 glory. But for now the Proteas can forget about games five and six.  It will be tough enough just to qualify for the semi-finals in a group containing three former winners:  England, the West Indies and Sri Lanka.

Earlier this week South Africa lost a come-from-behind three-match T20 series against perennial favourites, Australia. The loss might just be a blessing in disguise.  Had the Proteas beaten the Aussies, we would have once again started convincing ourselves that we can win a global trophy.  We cannot if you compare the Proteas player-for-player with the likes of Australia and India.  The only comfort is the knowledge that T20 cricket is a funny old game and, on the day, anything can happen…