Is the ICC serious about the World Cup? 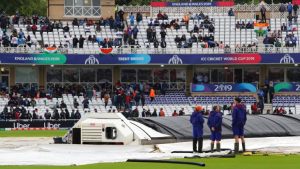 Is the ICC serious about the World Cup? (AP Photo)

Four weeks ago, just before the start of the Cricket World Cup (CWC), I expressed my excitement at looking forward to seven weeks of cricket enjoyment.  It wasn’t said tongue in cheek or facetiously; I meant it.

However, three weeks into the tournament, a few nasty things have reared their heads making me wonder if the International Cricket Council (ICC) is serious about the future of the CWC.  It may not seem so to the average fan or casual observer, but the signs are there.

Firstly, the CWC is scheduled to favour India because to the ICC money – that is Indian money – talks.  The CWC is a round robin format, with all ten teams playing each other before the four top teams progress to the semi-finals.  If India doesn’t qualify for the semi-finals, a lot of money will be lost (as it happened in 2007 when India exited the tournament after the group stage).  The current format has been implemented for the first time since 1992 because it gives India the best chance of qualifying for the semi-finals.

Furthermore, India played its first match of the tournament when other countries, notably South Africa, were already playing their third.  The reason for this is plain:  The Indians completed their Indian Premier League (IPL) season less than two weeks before the CWC started.  The players needed a break and so the ICC bent over backwards to help them.

Secondly, it has recently dawned on me that the ICC must have been mindless in planning the final on 14 July.  On the same day the men’s singles finals at Wimbledon will also be played, 11 miles away from Lord’s.

It would not have been hard for the ICC to avoid this clash.  For almost 150 years the Wimbledon Championships have always started on the Monday six weeks before the first Monday of August and it’s played over two weeks.  I know dozens of sports fans who will be just as interested in the events at Centre Court as in the CWC final.

Cricket doesn’t exist in a vacuum, especially not in this day and age when most of it is consumed by hopping between television channels.  Alas, the ICC hasn’t seemed to notice this, or maybe they just don’t care about the CWC.

(And for good measure, did you know that the British Formula 1 Grand Prix at Silverstone is also on 14 July?)

Finally, the hectic cricket schedule makes you wonder where exactly does the CWC fit in.  This year’s tournament could only happen in June and July because two other cricket events on either side wouldn’t budge:  The IPL in May and the Ashes in August.  What’s more important to the ICC, the CWC or appeasing India, England and Australia?  Apparently the latter.

For now, the ICC still views Test cricket as the sport’s pinnacle.  However, it is coming under more and more pressure from the new millennium’s rebel child, T20 cricket. T20 leagues have sprung up all over the world (the ICC approved leagues now number well over 30), pouring billions of dollars into the game.  To counteract T20 fever and to be seen paying not merely lip service to Test cricket, the ICC has introduced a World Test Championship which will start in August.

Somewhere in this cricket calendar chock-a-block with World Championship Test matches and the plethora of T20 cricket, the ICC has also squeezed in an ODI system designed for qualification for the 2023 CWC.  In this new dispensation, ODI cricket will very much play second fiddle to the other two formats.  It could disappear altogether after 2023.