Is the CSA review committee equipped for the task? 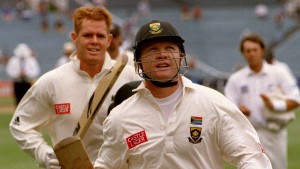 The Proteas cause would have been better served if CSA structured a committee based on experienced cricketing people like Shaun Pollock and Daryll Cullinan. Getty Images

While CSA must be commended for responding to the World T20 failure, there has to be concerns if this four person review committee has the cricketing experience, knowledge and skills to identify the reasons that the Proteas and their management team have failed. Only Bacher on the panel has played international cricket, but he never played in an ICC event. The rest have never been exposed to the dynamics that drive international cricket teams with regards to success and failure. Put in simple terms they won’t know what to look for.

The Proteas cause would have been better served if CSA structured a committee based on experienced cricketing people who have walked the cricketing road and lived through the glory and the failure. Their cricketing instincts would have told them how to interface with the modern day player and examine the right areas of the game to identify the short comings.

Having at least one or two former Protea player like Shaun Pollock or Daryll Cullinan who has experienced the pressure and disappointments of World Cups could only enhance the whole process. It is difficult to understand CSA’s reluctance to use the passion, experience and knowledge of its former players. Australia the most successful cricketing nation in the history of the game does this well to sustain and grow the Australian game.

CSA has been down this road before after the failures of the past and the problems have never been resolved. It is difficult seeing this committee being successful, if one looks at the magnitude of the task at hand and the cricket acumen of the review committee.