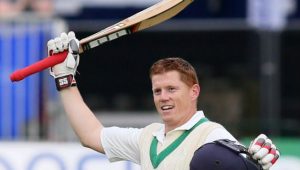 Kevin O’Brien scored a maiden Test hundred for Ireland when they debuted in their first ever Test match. © Getty Images

Ireland debuted in their first ever Test match in Dublin this past week. They lost to Pakistan by 5 wickets but Kevin O’Brien scored their maiden Test hundred in the second innings. Was it a great moment for cricket or will it prove to be another nation playing Test cricket that is not commercially sustainable, like Zimbabwe?

Test cricket is the format that was the start of international cricket when England and Australia played the first ever Test match in 1877 at the Melbourne Cricket Ground 141 years ago. It is very much a format that was born in the 19th century and is struggling to survive in the 21st century. Test cricket has come more and more under pressure from first the 50-over game and now the 20-over format. Also, the changing lifestyle has impacted negatively on a very long game.

The only country where Test cricket remains in demand is in England, with Test matches still being well supported and having a high profile. The Ashes series remains iconic and is probably the biggest cricket event in world cricket, even bigger than the Cricket World Cup. The International Cricket Council (ICC) has for years tried to talk up Test cricket as their number one format without backing it up with a well thought-out strategy and implementation. The awarding of Test status to Ireland and Afghanistan proves this.

Test cricket does not need more teams but less to sustain itself. There should be no more than nine nations playing Test cricket – even that is probably too many. The growth of cricket playing nations like Ireland and Bangladesh should be at the One Day International and International T20 cricket levels, not at Test level. They need to have a modern day approach to growing the game globally and sustaining it. Test cricket will certainly not do this as it belongs to an era long gone.

For Test cricket to survive – and it needs to for the future of the game – it has to be driven by quality and not quantity. Test cricket should be a closed system, played only by the established Test playing nations to ensure its future profile and commercial viability.

The ICC also needs to structure the future Test schedule better and consider a Test championship to create context for Test cricket. The modern day plethora of bilateral series without context will not sustain and promote Test cricket; in fact, they have become Test cricket’s biggest problem.

The introduction of Ireland and Afghanistan will not contribute to the future health of Test cricket but prove to be a further liability for the game, no different than Zimbabwe.