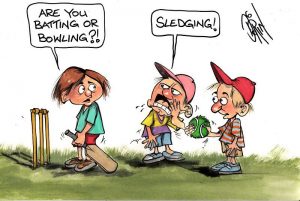 The International Cricket Council (ICC) needs to clean up the game with regard to so-called “sledging” and ball tampering. It was good to see Cricket Australia come down hard on the two perpetrators, Steve Smith and David Warner, with hefty bans that hurt them not only in cricket terms but also financially. They were not allowed to participate in the Indian Premier League (IPL) and this has literally cost them millions of US dollars.

This should have happened to Dwayne Bravo when as captain he led the abandonment of the West Indies tour of India a few years ago. He wasn’t even sanctioned and returned to play in the IPL a few weeks later. In fact, he should have been banned from the IPL for bringing the game into disrepute.

The ICC’S biggest challenge will be Australia as they have an attitude that they have a right to say or do on the field of play as they please. We have seen this for decades with the attitude of Greg Chappell, Shane Warne, Merv Hughes, Glenn McGrath and David Warner, to name but a few. David Lloyd summed it up best when asked about the latest ball tampering scandal. All he said was: “Australia again, Australia again”.

Listening to the IPL commentary there was a discussion about Virat Kohli’s success as both captain and player. Matthew Hayden said his approach was more Australian than Indian, insinuating that was why he was successful. What stupid arrogance and an insult to the Indian people.

Also, Michael Di Venuto, the former Australian player who now coaches Surrey, said that they would be interested in contracting the two banned Australian players. What he does not understand is these players have been banned for a year from all cricket and will not be given permission to play county cricket. That is the very reason they are not playing in the dollar rich IPL. Is he stupid or arrogant or just Australian? What does he not understand?

The Proteas also need to contribute to improving the image of international cricket. Let’s not forget the bad behaviour of Kagiso Rabada; not only against Australia but from previous series as well. Also, of the seven international players who have been charged with ball tampering three of those charged are South African, with the captain having been charged twice.

Rugby has successfully rid itself of thuggery like punching, tramping and foul play in general that has improved the games image. Cricket needs to do the same with regards to sledging and ball tampering and create a new cricket culture.