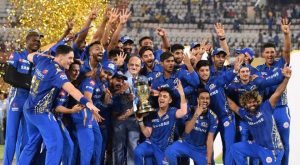 The 2019 IPL was a fantastic tournament with a dream final. (Photo Credit: K.R. Deepak)

The Indian Premier League (IPL) rates with all the great tournaments in the world of sport, like the English Premiership and EUFA Champions League. It is without doubt the biggest event in the cricketing world, bigger than the Cricket World Cup and the Ashes. The IPL has taken the profile of cricket to a new level and made it a truly global game.

The 2019 IPL was a fantastic tournament with great matches, sold out stadiums and a dream final. The two teams that played in the final, Mumbai Indians and Chennai Super Kings, provided one of the great IPL finals with Mumbai Indians winning by 1 run. These two teams have dominated the IPL in its twelve years’ existence and have collectively won the tournament on seven occasions. Mumbai Indians have won four IPL’s and Chennai Super Kings three. Kolkata Knight Riders have won the IPL on two occasions.

When the IPL started, overseas players were crucial to the success of the tournament but that has now all changed. The teams with their Indian stars are strong enough to sell the IPL to broadcasters, sponsors and millions of Indian cricket fans.

The South African contingent had a reasonable impact on the tournament, especially Kagiso Rabada and Imran Tahir who were the two top wicket takers. Quinton de Kock, Faf du Plessis and Chris Morris contributed to the success of their respective teams. The rest of the South Africans were disappointing, with Colin Ingram being considered the worst return on investment for an IPL franchise.

One of the most important aspects of the success of the IPL is that the governing council have kept the number of teams, format and scheduling consistent. The IPL, like major tennis and golf tournaments, now has a permanent fixture in the global sporting calendar.