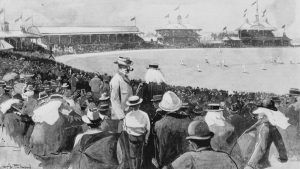 Will the World Test Championship once again make Test cricket as important as it was a hundred years ago? (Picture © Getty Images)

For years the International Cricket Council (ICC) said that Test cricket is their main product, but did nothing to market the oldest form of the game or give it context. However, they have now implemented the ICC World Test Championship (WTC) to give Test cricket a whole new dimension.

The WTC started on 1 August 2019 in the first Test of the Ashes series at Edgbaston and will culminate at Lord’s in June 2021 when the two top teams on the log play the final. During this period Test teams will earn points from the Tests they play and there will be a WTC log. The ICC will hope that this initiative will be a new lease on life for all bilateral Test series.

The health of Test cricket around the world varies from country to country and depends on the dynamics that drive cricket in each country. The recent Ashes once again proved that Test cricket in England is healthy; it just looks right even when other countries are touring England. The culture to support Test cricket is well entrenched and by far the best in the world. The one concern is that the new 100-ball competition does not have a negative effect over time.

In India, where the Indian Premier League (IPL) is such a massive success, Test match cricket has visibly been relegated behind the IPL and ODI cricket. In the past the Eden Gardens Test match used to attract more than 500,000 spectators. This no longer happens. It will be interesting to see if in this cricket mad country the WTC will have an impact on Test match attendances and interest.

The biggest decline in Test match interest has been in the West Indies. They have gone from overcrowded stadiums with fanatical support to Test match cricket being played in literally empty stadiums. The free fall of West Indies cricket has been the main reason. The halcyon days of the 70’s and 80’s are long gone and it is difficult seeing the WTC resuscitating West Indies cricket.

In South Africa a Test match culture does not exist, with the exception of the Newlands Test. Twenty two years of isolation and the policies of Cricket South Africa have resulted in this situation. However, South Africa is the one cricket playing nation where the WTC could have a positive effect as the country evolves.

The rest of the Test playing nations will only benefit from a participation point of view because cricket is either not a high profile sport in these countries or the population is too small. Pakistan is the one exception, but only if they can start having inbound tours to their country.

The ICC must be congratulated on this positive initiative for Test cricket as the future of the game depends on the intrigue and the ebb and flow of Test cricket. Without it the game will surely die.