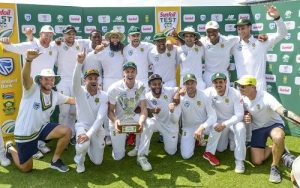 Will the Proteas also be successful in the new Test Championship? (Photo by Sydney Seshibedi/Gallo Images)

The nine top-ranked Test nations will slug it out for the Test Championship over two two-year cycles.   The inaugural cycle will run from 15 July 2019 to 30 April 2021. The sides will play six series in a two-year cycle on a home and away basis against opponents they have “mutually selected”.  The series can consist of anywhere between two and five matches’ duration.  Points will be awarded for individual Test match wins, with matches in shorter series worth more.  The two top-ranked sides will then progress to the June 2021 final to decide the first World Test Champions.

The ICC has been debating a Test Championship for many years.  The general consensus was that Test cricket (apart from the Ashes) lacked context – there was nothing meaningful to play for in any other bilateral series.  It led to waning interest in Test cricket, dwindling to virtually non-existent crowds and, most alarmingly, the growing fear of match-fixing.  It remains to be seen whether “context” will be the magic wand to remove these threats.

It cannot be easy to implement something like the Test Championship.  A labyrinth of commercial deals, television rights and match scheduling have to be negotiated.  The ICC should be lauded for the initiative, but there is also no denying that the concept already has a few gaping holes.

Firstly, the Championship purports to be a league format.  In every proper league format anywhere in the world in any sport, a team plays at least once against every other team in the league.  A proper Test Championship should therefore consist of at least eight series.  The current Test Championship is already half-baked by allowing teams to “mutually select” their six series in a cycle.   This structure becomes even more puzzling in light of the ICC’s simultaneous announcement that not all Test matches will count towards the Test Championship, and that countries will be allowed to play bilateral series which outcomes will not affect the Test Championship…  Can the team that wins the final then really call themselves “Test Champions” if they haven’t played against all the other eight Test teams?  (Incidentally, this is the same trap into which Super Rugby has fallen and why its league structure is a mess.)

Along with the Test Championship, the international programme also features a significant rise in the number of T20 Internationals to be played.  South Africa, for example, will play 56 T20I’s over the next four years (fourteen per year).  The ICC expressed the hope that “a league for the format may be added to the program from 2023 onwards”.  This is a real threat to the future of Test cricket.  The ICC is trying to balance the commercial interests of T20 cricket with the future of Test cricket, but it’s treading a very fine line.

There is also a difference of opinion in the ICC ranks over where the first two finals – in 2021 and 2023 – should be played.  Most countries appear to favour the country where the game originated, England.  Also, the finals are scheduled for June, so England (again) should be the logical choice.  India, however, is believed to be of the view that the final should be hosted by whichever team finishes at the top of the championship table at the cut-off date.

A parallel ODI series league will begin in 2020, leading into the 2023 World Cup.  The top seven nations in the league will earn automatic berths for the showpiece tournament, with the remainder being compelled to play a qualifying tournament.  All ODI series have been capped at three matches apiece.  South Africa will start their ODI campaign with a home series against Australia, scheduled for March 2020.