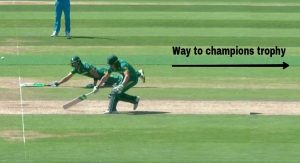 The ICC Champions Trophy Final on Sunday will be a great occasion between two bitter rivals of world cricket.

The ICC Champions Trophy Final on Sunday at the Oval will be played between the biggest rivals in world cricket: Pakistan and India.  Once again Pakistan, known for their giant-killing acts at ICC tournaments, stood up from the dead to easily beat England in the Cardiff semi-final. The final will be a great occasion between two bitter rivals of world cricket.

India will start as favourites because it seems as if this Pakistan team feels inferior to their Indian counterparts who are rock stars in world cricket and in their own cricket mad country.  India has the stronger batting line-up with more experienced match-winners and is the defending champions. However, on the day any of the two can win and Pakistan is known to win tournaments from the dead. Remember the 1992 World Cup in Australia…

For the ICC this is a dream final, especially for their sponsors who are mainly Asian-based. The television audience will be massive – in excess of a billion cricket fans watching, mainly on the sub-continent. It promises to be a fitting climax to what has been an outstanding global event.

The format of eight teams has been superb with each match having context, especially the final group stage matches. The ICC has eventually got the format right by not confusing excellence with development; this has been the best ICC tournament since the 1992 Cricket World Cup in Australia. For the next Cricket World Cup they need to stick to the same format, with eight teams playing a round robin of seven matches, and then the semi-final and final.

So what happened to the Proteas who once again entered the tournament as the ICC number one ranked ODI team and the favourites? After the first match against Sri Lanka they never looked like qualifying for the play-offs and were poor in big defeats to Pakistan and India. The comments of AB de Villiers after the tournament left much to be desired. Once again the team have behaved like ostriches on exiting an ICC event with reality being left to another day.

The first problem was the selection of the team with far too many bits and pieces cricketers. The selectors have struggled to identify the difference between ODI and T20 cricket. ODI cricket needs specialists, with all-rounders bringing the balance to the team, but definitely not these bits and pieces cricketers. Also, the selectors need to identify and accept that certain players are just not good enough for international cricket and can’t perform under pressure; they have let the side down literally for years now.

If the Proteas are to shed the “chokers tag” the senior players will have to stand up and be counted. This has not happened for twenty five years. Changing the coach will not solve the problem as he can only do so much. It is up to the players to accept the responsibility. During the last twenty five years there have been eight coaches but the failures have continued unabated.

It is also too close to the 2019 ICC World Cup to change the coach and the management team; it will create too much uncertainty within the team. The selectors need to have the same captain for both Test and ODI cricket, and that is Faf du Plessis. The next World Cup is also in England in 2019 and the Proteas need to learn from their mistakes on this dry run if they are to have any chance of winning South Africa’s first World Cup.