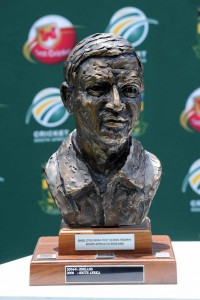 South Africa is in for a memorable summer of Test cricket against England. The four Test match series will appropriately be played for the Basil D’Oliveira Trophy. Photo by Lee Warren / Gallo Images

England cricket tours to South Africa are special for a variety of reasons, but mainly for the political and cricketing history that exists between the two countries. England was the first international team to tour South Africa in the 1888/89 season. The first Test played by South Africa took place at St George’s Park in Port Elizabeth in March 1889. England has toured South Africa on 18 occasions, more than any other country. It has won ten of the Test series and South Africa five; three have been drawn.

Historically the media interest, both internationally and locally, in England tours to South Africa has always been high. England has the biggest travelling media contingent of all cricketing countries. Between the South African media and the travelling media the tour will once again be high profile with extensive media coverage worldwide.

In addition Sir Ian Botham has already arrived in South Africa and doing his famous charity walks to raise funds for four South African Foundations. This is the 30th anniversary of his world famous charity walks. This generous gesture by the former iconic England all-rounder also adds to the profile, expectation and interest of this tour.

The England team enjoys more support from travelling fans than any other international team in world cricket. South Africa is a very popular destination for cricketing fans and it is estimated that some twenty thousand English fans will make the safari to South Africa. Of these there will be some seven thousand Barmy Army fans that will ensure a fantastic atmosphere at the Test venues with their vocal support and singing. Capacity crowds, mainly British, are expected at both the Kingsmead and Newlands Tests.

The Wanderers and SuperSport Park will have a more South African flavour because of the scheduling of both Tests taking place in mid-January. However, both Tests will be well supported by South Africans who will enjoy the opportunity to watch their team against the old foe.

Commercially England tours are an important revenue generator for Cricket South Africa (CSA). Only Indian tours generate more revenue for CSA from television rights. The television rights deal with Sky will probably be in the vicinity of £8 million. Also hospitality, entrance tickets, food concessions, beverages and merchandise sales will generate millions of rand for the venues. The South African economy will also benefit from the tour with the influx of British cricket fans.

The four Test match series will appropriately be played for the Basil D’Oliveira Trophy. The significance of the trophy is etched in history with Dolly having had to leave the country of his birth to play Test cricket and the cancellation of the 1968 English tour.

The clash between the number one ranked Test team and the current Ashes holders, combined with its history, will make for a compelling Test series. South Africa is in for a memorable summer of Test cricket against England.