England safari one of two halves 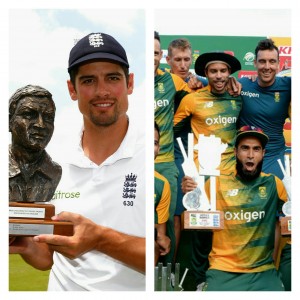 A tour of two halves

The recent England tour of South Africa was a bitter-sweet experience for both teams; in fact it was a tour of two halves. England dominated the Test series and made a great start to the ODI series before gifting the series to the South Africans. The T20 series was very similar as England cracked at Newlands, handed the Proteas the first match and never recovered from there.

England will feel that they lost an opportunity to have had a dominant tour of South Africa. They should have won the ODI series and shared the T20 international series to go with their impressive Test series win. Winning the Test series would have been England’s main objective and they will feel mission accomplished. For the rest it is a case of a lost opportunity.

South Africa stood up from the dead to restore some pride after they not only lost the Test series but also surrendered their number one ICC Test ranking. At two-nil down in the ODI series they were staring down the barrel of a gun, but showed some good old-fashioned South African guts and restored their pride by winning the two limited overs series.

Where does this leave the two teams going forward?

England are fast developing into a very good Test team with their good balance and will soon challenge Australia as the number one Test team in world cricket. In the limited overs game they have some very good batting but their bowling attack is too inexperienced. They need to inject some pace and find a leader of their attack if they are to compete. Also, there must be some questions around the leadership of Eion Morgan. Once England was under pressure, they simply went into free-fall mode as team.

South Africa needs to rebuild their Test team for the future. The retirements of Graeme Smith, Jacques Kallis, Alviro Petersen and Ashwell Prince have left just too many gaps. There is too much pressure on Hashim Amla and AB de Villiers. An ageing bowling attack is also taking strain because of injuries and will need to be replaced in the near future. However, the development of Kagiso Rabada for the future is exciting and positive. It will take some time for South Africa to once again challenge to be the number one Test team after dominating for so long.

It is difficult to assess where the limited overs team really is right now. They enjoyed memorable limited overs series wins in both formats against India on the sub-continent and against England. In many ways England’s poor fielding and catching let the Proteas off the hook, but the victories in India were legendary.

Australia is the Cricket World Cup holders and the number one ranked Test team in world cricket. It is difficult to see any other team in the world challenging their superiority in the near future.