England and Moores under pressure 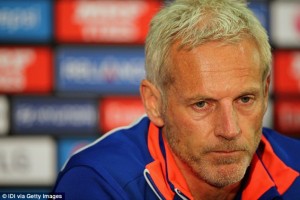 Team England and their coach, Peter Moores, find themselves under pressure after sharing the Test series against a struggling West Indies team in the Caribbean. Added to the Caribbean disappointment is a disastrous Cricket World Cup in Australasia when they failed to qualify for the knockout stage. That they are a team in crisis, there is no doubt.

The hierarchy will be hoping that the England team will radically improve their performances at home against New Zealand, as they will want to avoid another leadership crisis like they had on the eve of the Cricket World Cup. Their performances in the New Zealand series will not only be crucial for the future of Moores and captain Alistair Cook, but also for a competitive home Ashes series.

The ECB will soon be appointing a new Managing Director of Cricket.  He will have some very important matters to deal with and decisions to make. The coach and captain will be at the top of his agenda if England fails to produce in the New Zealand and Ashes series. He will also need to deal with the ongoing Kevin Pietersen matter that refuses to go away because of KP’s profile, the British media and mainly fuelled by the lack of success of the England team. English cricket needs to move on past the KP era and the new MD will need to facilitate it.

With the exception of three Ashes victories and winning the World T20 in recent years, England has struggled to perform consistently against the top cricketing nations. Once again they find themselves in a crisis like so many times in recent years.

England not only has a great history in international cricket, especially in Tests, but also a very strong infra-structure and following. The international game is well supported by fans at the grounds, great television coverage by Sky Sport (including cricket magazine shows), BBC Radio ball-by-ball commentary and reported on by all the major newspapers.

The game is commercially strong because of its profile and the players are the best paid of all international cricketers, maybe with the exception of the Indians. The pipeline of eighteen counties, centres of excellence, academies and youth development are well structured and financed by the ECB.

English cricket is administratively, commercially and structurally strong so there is no reason why they should not be able to field a competitive team on a consistent basis.