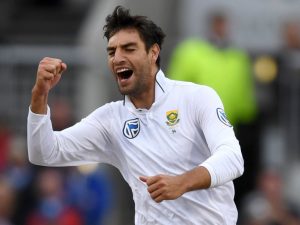 Duanne Olivier’s decision to sign a Kolpak contract is premature.

The decision by Duanne Olivier to turn his back on international cricket and sign a three-year contract with Yorkshire as a Kolpak player has once again placed the spotlight on Kolpak.

The matter is sensitive because he is a current member of the South African Test team, like Kyle Abbott was before him. He is only 26 years of age, played in 10 Test matches and has just broken into the ICC Top 20 ranking for fast bowlers. So was it the right decision or not?

Finances would have been a consideration but it is hard to believe a county being able to outbid an international body like Cricket South Africa (CSA). For years, Yorkshire in particular have been kept alive financially by their benefactor, Colin Greaves, who is now the Chairman of the England and Wales Cricket Board. CSA would have offered Olivier a retainer well in excess of a million rand, match fees, series win bonuses and image rights. It is difficult to believe that this would be less than a county offer, even if it is in British pounds.

Security would have played a role in his decision. But if international cricket was not going according to plan for him, he is young enough to make a decision to pursue a county career further down the line.

The transformation policies of CSA would have played a very big role in his decision. If a cricketer cannot be picked on merit, it leaves him no option but to look for opportunities where there is cricket equity. Politics are permanently part of South African society and cricket. Until the cricket system is normalised, CSA will continue losing cricketers to Kolpak and other normal opportunities around the cricketing world.

When one takes all the facts into account, it is difficult not to come to the conclusion that it has been a premature decision and Olivier is paying a price for the security of becoming a county “trundler”.