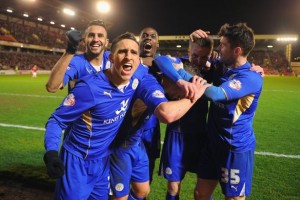 Leicester City is sitting pretty atop the EPL at the moment. With eight games left, they are seven points clear of their nearest rival.

It is a hard fact that modern day sport is driven by economic realities. Inevitably the rich and powerful get wealthier and more successful, leaving the small and poor in their trail of glory.

Football is a perfect example. With the exception of Blackburn Rovers in 1994/5, the English Premier League (EPL) has only been won by four teams:  Manchester United, Manchester City, Chelsea and Arsenal.  It’s no coincidence that the teams are also respectively the third, fifth, sixth and seventh wealthiest football clubs in the world.  A similar pattern has unfolded over the last three decades in Spain (Real Madrid and Barcelona), Germany (Bayern Munich) and Italy (Juventus and AC Milan).

Cricket is no different. The most lucrative competition in the world is the Indian Premier League (IPL).  Over the course of the eight previous IPL’s, the three wealthiest teams, in this order, have been Kolkata Knight Riders (KKR), Mumbai Indians (MI) and Chennai Super Kings (CSK).  (CSK is suspended for the 2016 and 2017 IPL.)  Up to 2015, eleven different teams had participated in the event.  Eight IPL’s equal sixteen finalists.  KKR, MI and CSK have each won it twice, while collectively they have made up eleven of the sixteen finalists.  Coincidence?  I don’t think so.

There are similar patterns around the world in sports like rugby union, rugby league, cycling and the four major American sports. Wealth has created torpidity in sports leagues and tournaments.  We all know who the winners are going to be before it starts.

How refreshing it is, therefore, to see little (with all due respect) Leicester City sitting pretty atop the EPL at the moment. With eight games left, they are seven points clear of their nearest rival.  The title is Leicester City’s for the taking.  One can only imagine the current excitement at the club and among the fans.  A true David and Goliath story in the making!

Enter party spoiler Charlie Stillitano. On 3 March Stillitano made himself the pariah of every Leicester City fan and objective football follower.  Stillitano, an American, is trying to set up a European Super League in which the richest clubs’ position will be ensconced.  On the infamous day, Stillitano with breath-taking arrogance and short-sightedness declared that European football didn’t need a club like Leicester City.  Because of money, Stillitano wants to take away the dreams of all “small club” supporters that their club too can “do a Leicester”.  Despite what Stillitano says, fans of all clubs – even the rich and powerful – would regard “doing a Leicester” as a rather marvellous turn of events.  The very essence of what makes football at its most competitive so special.

The hope must be that this is yet more top-down revolution bluster that will eventually vanish, but the possibility of it gaining traction cannot be ruled out. If someone like Stillitano is allowed to have his way, then professional sport has truly arrived at a point where money rules and nothing but nothing else.

Since 1892, the Currie Cup has been the most prestigious competition in South African rugby. The new season kicks off this weekend.  In its current format, the six wealthy franchises from the major cities have entrenched places in the competition.  Griquas is one of the teams that have to go through a qualification competition to play in the Currie Cup proper.  The union has won the Currie Cup three times – in 1899, 1911 and 1970.  How much richer our proud rugby heritage would be if Griquas could “do a Leicester”…

(PS: Of course Leicester City may not win the EPL title this season.  But barring an absolute disaster, they will finish in the top three and reach the lucrative Champions League; if they finish fourth they will have to qualify via a play-off.  Either way, it will be a first for the club.)