Does the SA ‘A’ team offer any hope for the future? 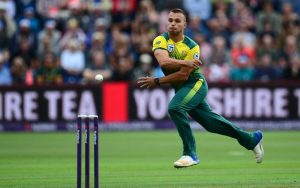 On the bowling front, Paterson is knocking on the World Cup door. (Photo by Harry Trump/Getty Images)

For a number of years now it has become the norm for the South African ‘A’ team to participate in a triangular series with their counterparts from Australia and India.

The hosting of the series rotates between the three countries.  Typically the series consist of the host country playing two unofficial, four-day “Test” matches (officially these matches are regarded as first-class games) against one of the other two, followed by a triangular in which all three countries play each other twice with a final to decide a series winner, and finally another two unofficial four-day “Test” matches between the hosts and the third country involved.

South Africa’s record in these trilateral series is abysmal.  The ‘A’ team last won a series in 2014, beating Australia 1-0 in the two-match unofficial “Test” series in South Africa.  Their bad run was continued in the recently completed series in India.  India ‘A’ comprehensively won the “Test” series 1-0, the second match being a rain-affected affair.  The one-day series was converted into a quadrangular event also involving India ‘B’.  The SA ‘A’ team only won one game, lost to India ‘B’ and finished last.

So what hope, if any, does the Indian tour offer South African cricket?  Is there life after AB de Villiers and Morné Morkel and what back-up is there for the 2019 World Cup?  Surprisingly, it is perhaps not all doom and gloom.

The Knights’ wicketkeeper-batsman, Rudi Second, was by far the best player on tour.  In the “Test” series he made scores of 94, 94 and 49, and was the only batsman who looked capable of handling Indian legbreak wizard Yuzvendra Chahal.  He had fewer chances in the quadrangular series but impressed with his glovework behind the stumps, like he did in the “Tests”.  Heinrich Klaasen is currently the Proteas’ reserve wicketkeeper-batsman.  Second has done more than enough to at least pull equal with Klaasen.

The other bright light on the batting front was the performances of the right-hander from the Cobras, Zubayr Hamza, in the “Test” series.  After scoring an unbeaten 104 in a warm-up match, he followed it up with scores of 63 and 93 in the series.  Hamza was not in the one-day squad.

In the quadrangular series there was only one noteworthy knock – Khaya Zondo’s 117 against Australia ‘A’.

On the batting front, Second is a genuine contender for a spot in the Test squad and Hamza could press for Test recognition in the years to come.  But for the rest there was not much to write home about and certainly no contenders for World Cup places.

Duane Olivier took ten wickets in the “Test” series and all the bowlers did all right in the “Tests” and quadrangular series.  But it wasn’t until Dane Paterson produced figures of  9.3-2-19-5 in the penultimate one-dayer that there was a really stand-out performance.  Paterson was impressive in the two matches he played.  The 29-year-old right-arm fast bowler regularly finishes off T20 matches in domestic competitions, banking on an assortment of variations in the death overs.  But in this series he showed he could be effective in one-dayers too.

On the bowling front, Paterson is knocking on the World Cup door but there is no apparent heir to Morkel.