Did South Africa deserve to be awarded the 2023 Rugby World Cup? 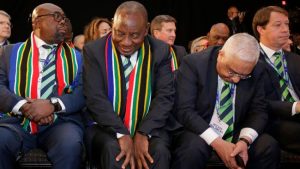 Unless South Africa gets its act together, it will continue to be overlooked in a very competitive world.

After the International Rugby Board’s (IRB) technical committee announced that South Africa was the preferred candidate to host the 2023 Rugby World Cup, there was a high expectation that the IRB World Council would just rubber-stamp South Africa’s nomination. However, when the 39 Members voted they decided that France be awarded the 2023 Rugby World Cup by 24 votes to 15. The other candidate, Ireland, was eliminated in the first round of voting.

It was naïve of South Africans and the South African Rugby Union (SARU) to think that the technical committee’s recommendations only needed to be rubber-stamped. The evaluation percentages between all three countries were small. The SuperSport rugby experts certainly showed a disrespect or lack of understanding for the due process and were blindly subjective on the matter.

When one analyses all the facts of South Africa today and SARU, it is not difficult to see why the bid failed.

Can one really expect a country that is on the United Nations genocide watch to be awarded a global event?  When tourists are being robbed at OR Tambo Airport on arrival, what message does it send out to the rest of the world? This must raise the concern if there is there is enough confidence in the South African government to ensure the security of such an event.

The South African government of President Jacob Zuma lacks credibility in the world. The country’s politics are at best unstable, but realistically in a shambles because of corruption that is being protected by factionalism. The country’s economy is in danger of falling into serious decline because of mismanagement by the government due to corruption and overspending. The 2023 World Cup is a long way away and both the political and economic situation can easily deteriorate into a crisis by then, so why risk the tournament?

There can be little doubt that the way SARU has administrated the game in this country has led to the radical decline in Springbok rugby and the domestic game in South Africa. The administrators in world rugby would have taken note of this and probably feel that SARU cannot be trusted with this prestigious tournament.

The country today is not the South Africa of Nelson Mandela and the so-called rainbow nation is no longer the flavour of the world. Unless the country gets its act together politically, racially and economically, it will continue to be overlooked in a very competitive world and become more and more isolated.