Did England deserve to be crowned World Champions at Lord’s? 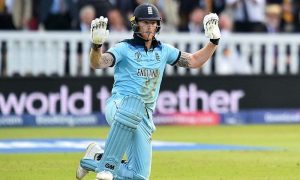 The overthrow that went for four off Ben Stokes’ bat was the death knell for New Zealand in the Cricket World Cup.  (Photo by Glyn KIRK/AFP)

Now that all the emotions of winning and losing have been digested after the Cricket World Cup (CWC) final at Lord’s, the question needs to be asked if England deserved to be crowned 2019 CWC champions or not?

England never won the match with both the final and the super over ending in a tie. To separate the teams they used some arbitrary T20 rule that the team who hit the most boundaries (and that was England) won. In the final analysis England was awarded the World Cup on a technical basis as New Zealand was never beaten.

What an unsatisfactory way of deciding the destiny of the CWC.  Why could there not have been an additional super over to determine a fair winner? To the credit of England captain, Eoin Morgan, he publically stated three days after the final that it was not the ideal way to win the CWC.

There were two other incidents that influenced New Zealand negatively. Those were the Decision Review System (DRS) and the overthrow law.

Marais Erasmus made two crucial mistakes in England’s favour. He gave Ross Taylor out LBW when there were no referrals left; it was clearly too high. Also, he gave Jason Roy not out when the ball was crashing into leg stump. The decision was referred but remained umpire’s call on a technicality and was not overturned.

Erasmus is the best umpire in the world. He made two human errors and the DRS could not assist him. The International Cricket Council needs to revisit the use of the DRS as it has become a lottery and not adding the value it can to the big moments in the game.

The overthrow that went for four off Ben Stokes’ bat was the death knell for New Zealand. It has been spoken about for years that the rule needs to be changed that if the ball ricochets off the wickets or batsman from a throw, it should be called a dead ball. It has taken a CWC final to highlight this matter and hopefully the MCC rules committee will now address it.

For the rest, the rub of the green went totally against New Zealand when one looks at the vital moments in the game that went England’s way, like the Bolt catch on the rope. However, this is the dynamics of cricket and it simply wasn’t meant to be for New Zealand. It was to be England’s day and tournament.

England did not deserve to be the CWC champions at Lord’s on that memorable Sunday as they did not beat New Zealand. However, their record of the past four years between CWC’s justifies their World Champions status as they have been the best One Day International team in world cricket.