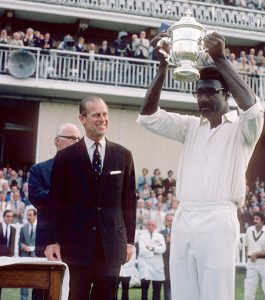 By the time this column is posted, the 12th Cricket World Cup (CWC) will have started when the hosts, England, play South Africa at the Oval in the opening match.

Since the first CWC in England in 1975, only five countries have ever won the CWC: Australia (5), India (2), West Indies (2), and Pakistan and Sri Lanka once each.

The opening match will be crucial for both England and South Africa for different reasons. England is the hot favourites to win their first CWC and will want to start well to justify the pole position they enjoy. South Africa on the other hand is starting the tournament with no expectations on them to win it. They will want to show that they are capable of competing and upsetting the old foe.

For the first time since 1992 the Proteas start the CWC as just another team compared to their predecessors, who always started as the team to beat and as one of the favourites to win the CWC. For this team there will be no “chokers” tag as they are not expected to challenge for the CWC (except for those maybe in South Africa). It is difficult seeing this Proteas team winning a minimum of five matches to qualify for the play-offs. For me the favourites to qualify for the play-offs are England, India, Australia and Pakistan, with New Zealand also a contender.

In think Australia will win the CWC because of their never-say-die attitude, mental toughness and CWC experience, with most of the squad having already tasted success in their 2015 triumph. With the return of David Warner and Steve Smith they have almost the same squad as in 2015. Historically, they are the most successful team in world cricket and the CWC.

The CWC will be a great tournament in England and probably the most competitive since 1992 being played at what is still the home of cricket. The ten team tournament played on a round robin basis with the two semi-finals and final will be a great advert for the CWC and One Day International cricket. There are no passengers, like in the CWC’s after 1992, with Associate Members cluttering the schedule and lowering the standards.

There can be no complaints by other cricket playing nations as the International Cricket Council playing structure gave every cricketing nation a fair chance to reach England. The mistake made in the past was confusing the development of the game globally with its showpiece, the CWC. Now that this has been rectified the cricket world will see a great CWC like in 1992.