Cricket World Cup a great advert for the game 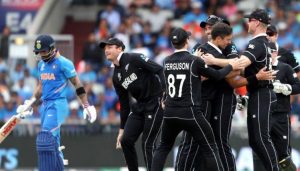 The Cricket World Cup a great advert for the game.

The Cricket World Cup (CWC) culminates with the final at Lord’s on Sunday and from an English point it could be the dream day. England plays New Zealand and if England win their first ever CWC at the home of cricket, it will be a great day in the long, rich history of English cricket.

The CWC has been an outstanding success in England with regard to the standard and competitive nature of the matches. All the matches have been competitive and there have been no easy ones. For example, India finished top of the log after the pool stages and only beat Afghanistan, who ended bottom of the log, by 11 runs. The International Cricket Council made a wise decision to cut the teams back to ten. They have for years wasted time and resources in trying to promote the international game on the global stage. The Associate members have achieved very little in past CWCs and only lowered the standard, cluttering the playing schedule.

There is a definite gap between the top three teams – Australia, England and India – and the rest. The exceptions to this are New Zealand (who could still win the CWC) and Pakistan. Pakistan was unlucky to be eliminated on run rate against New Zealand. The criteria should have been the team that won the head-to-head match; that was Pakistan. They are a young team with an average age of 24 and will be serious contenders for the 2023 CWC in India.

South Africa was the disappointment of the CWC. But in real terms it was not surprising when one looks at their performances in England in the 2017 Champions Trophy and their prior defeat against England in an ODI series. The soft series they have recently played against Zimbabwe, Sri Lanka and Bangladesh have covered the cracks that exist in this South African team. Also, they were lucky to beat Pakistan in South Africa last summer.

With their current policies on team selection and the appointment of coaching personnel, it is difficult seeing South Africa reaching the heights of previous CWCs in the years to come. The rest of the cricketing world is continually lifting the bar and South Africa is struggling to remain in touch through all the national age groups.