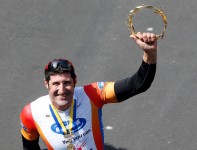 Photograph by: Jim Rogash, Getty Images Ernst Van Dyk returned to the top of the podium for a record tenth time in the wheelchair division of the Boston Marathon.  Van Dyk became the first athlete in any division to win the world’s oldest and most prestigious marathon ten times. Van Dyk led from start to finish on Monday, getting in front early and extending his lead through the hills at the start of the course.  He broke the tape in an excellent time of 1:20:36, the second fastest time of his ten triumphs.  Only in 2004, when he set the former course record of 1:18:27, did he complete the event in a quicker time. After his ninth victory in 2010, Van Dyk had to endure four frustrating years to achieve his goal of ten Boston titles.  The 41-year-old said afterwards:  “South Africa needed good news and I regarded it as… Continue reading

Cobras seamer, Beuran Hendricks, received his maiden call-up for the Proteas’ T20 squad.  The 23-year-old has been included in the squad to face Australia in a three-match T20 series from 9 – 14 March as well as the ICC World Twenty20 in Bangladesh later in March. “It’s a dream come true,” a delighted Hendricks said. “I have been dreaming of playing for the Proteas since I was nine years old.  It’s even more special because it’s a World Cup year.  I will cherish this forever.” Last week, Hendricks was bought by the Kings XI Punjab for the 2014 Indian Premier League (IPL), but says his call-up beats the IPL deal because it is something he has been striving for since he made his first-class debut. Hendricks credits Cricket South Africa’s High Performance coach, Vincent Barnes, and Cobras bowler, Charl Langeveldt, as the guiding forces in his young career.  “Vincent and… Continue reading

Ryan McLaren’s Man of the Series award in the recently completed series between South Africa and Pakistan in the UAE is just reward for his sterling all-round performances in ODI’s so far this year. The Proteas all-rounder is the leading fast bowler in ODI’s in 2013.  In 179.3 overs across 22 ODI’s, McLaren has bagged 39 wickets at an average of 23.  Only spin bowlers Saeed Ajmal (Pakistan) and Ravindra Jadeja (India) have taken more, but then they respectively also had three and five ODI’s more to get those wickets. With the exception of the once-off ODI against the Netherlands and the series against Sri Lanka in July / August, McLaren (30) has been the Proteas’ leading wicket taker in every ODI series in 2013. But it is when you add his contributions with the bat that McLaren’s true worth to the South African cause becomes clear.  Batting at no.7… Continue reading