One World of Sport is very proud to announce that one of the rising stars of Afghanistan cricket, Najibullah Zadran, has signed a long-term representation agreement. Zadran is a 22-year old left-hand, middle-order batsman. He made his international debut in 2012 at the age of 19 in an ODI against Ireland. He has since represented his country in 19 ODI’s and 16 T20I’s. Zadran already has two ODI fifties behind his name, with a highest score of 83. At this year’s World Cup he scored 56 at a run-a-ball against hosts and eventual runners-up, New Zealand, in Napier. Zadran is One World of Sport’s second signing in the fledgling cricket country following in the footsteps of the current Afghanistan international star, Mohammad Nabi, in 2014. Nabi is the only player from Afghanistan currently playing in the Bangladesh Premier League. Continue reading

One World of Sport is proud to announce that it has signed a long-term representation agreement with former Proteas spin bowler, Nicky Bojé. Bojé recently took over as head coach of the Knights franchise following the resignation of Sarel Cilliers. He will coach the central franchise until the end of the 2015/16 season. Bojé enjoyed an illustrious cricket career spanning more than 20 years. He played 159 games for the Proteas across all three formats. In South Africa he played for the Free State (now the Knights) and the Warriors, while in county cricket he represented Northamptonshire and Nottinghamshire with distinction. Bojé also had a successful stint in the now defunct Indian Cricket League with the Hyderabad Heroes. One World of Sport will represent Bojé as an international cricket coach.   Continue reading 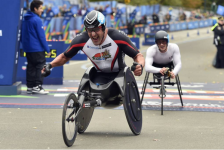 South Africa’s champion wheelchair athlete, Ernst van Dyk, on Sunday won the New York Marathon for a second time in his career, exactly ten years after his first success. Van Dyk, who finished fourth in the Chicago Marathon three weeks ago, outsprinted America’s Josh George by a mere second to cover the course in 1hr 30min 54sec. In 2005 Van Dyk’s time was a then course record 1hr 31min 11sec, improving on his personal best by 17 seconds. The weather conditions for the New York Marathon are usually quite windy but this year it was good all the way, which suited Van Dyk. By the halfway mark, Van Dyk was in in a leading group of three with the lead changing all the time. It eventually changed into a two-way race with the American Josh George as they entered downtown New York along First Avenue, about 10km from the end.… Continue reading 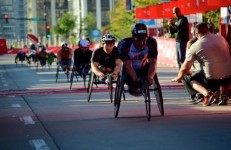 Just four seconds separated fourth-placed Ernst van Dyk from first place at Sunday’s Chicago Marathon. The 10-time Boston Marathon winner clocked 1hr 30min 50sec. Van Dyk, who won the Chicago Marathon two years ago, was trying out his new racing chair in an elite race for the first time: “The new chair felt good, especially on the very rough Chicago roads and going into the wind. But I need to work on my cornering skills a bit as the dynamics are a bit different.” Van Dyk was a little bit disappointed with the result: “Of course I would have liked a top three finish, but the fitness level of the guys was really very high today. We went very fast for the first half and were on pace to crack the course record. But then the wind picked up.” “In the end there were still 12 of us in with… Continue reading One World of Sport is very proud to announce that the signing of the South African opening batsman Reeza Hendricks. The 25-year old Hendricks, a right-handed batsman, made his international debut against Australia last year in Adelaide in a T20 international.  He has since played four more T20 internationals for the Proteas.  He has a highest T20I score of 49. Last month, Hendricks was included in the South African test squad for the first time in his career for the tour to Bangladesh in July.  After the Bangladesh series, Hendricks will join the SA ‘A’ four-day and 50-over squads for a tour of India in August. Hendricks has played all his domestic cricket for the Knights.  His record reads as follows: First-class:  93 matches; 5,167 runs; highest score 157; average 34.44; strike rate 51.66; 10 hundreds & 25 fifties. List A:  90 matches;  2,936 runs; highest score 181; average… Continue reading

At Cricket South Africa’s gala banquet in Midrand on Wednesday night, three cricketers represented by One World of Sport were rewarded for their achievements during the 2014/15 season. The big winner among them was the Cobras fast bowler Dane Paterson.  Not only did his fellow-professionals vote for him as the Domestic Players’ Player of the Season, he also received the South African Cricketers’ Association’s Most Valuable Player award for 2014/15.  The awards capped off a memorable week for Paterson, who earlier received national recognition for the first time when he was selected for the SA ‘A’ squad to tour India in July and August. Also receiving awards were Robin Peterson, the Momentum One-Day Cup Player of the Season, and Keegan Petersen, the Momentum National Club Championships Player of the Tournament. Elsewhere, at the post-season prize-giving functions of the Titans and Northerns, Theunis de Bruyn and Heinrich Klaasen also received awards. … Continue reading 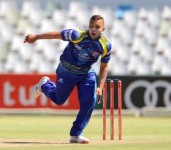 Several cricketers represented by One World of Sport have in the post-season been rewarded for their achievements during the 2014/15 season. Top of the list is Cobras fast bowler, Dane Paterson. At the Cobras’ recent awards ceremony Paterson received no fewer than three awards. He claimed the franchise’s ultimate accolade of Player of the Year, as well as the Players’ Player of the Year (as decided by his teammates) and the prize for first-class cricket, the Sunfoil Series Player of the Year. In addition Paterson also ended the season in the number 1 spot on the South African Cricketers’ Association’s “Most Valuable Player” ranking. He will receive his award for this achievement at Cricket South Africa’s annual awards ceremony on 3 June. Warriors all-rounder Jon Jon Smuts received two awards from the franchise for his achievements in T20 cricket this season. Smuts was crowned T20 Batsman and T20 Bowler of… Continue reading 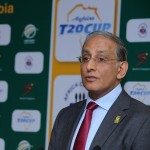 Cricket South Africa (CSA) has launched a new 16-team Africa T20 Cup which will be the curtain-raiser to the 2015-16 season.The tournament will run from 4 September to 4 October. Zimbabwe, Kenya and Namibia have accepted invitations to compete in the event, together with the 13 South African provincial teams. The tournament will consist of four pools of four teams each, with the winners of each pool advancing to the semi-finals and eventually to the final. Easterns (Willowmoore Park), North West (Senwes Park), Griquas (Diamond Oval) and Free State (Mangaung Oval) will be the hosts for the pool matches. The venue for the semi-finals (3 October) and final (4 October) will be decided after an assessment of the quality of venue hosting during the pool stages. The South African provinces will be allowed to field one CSA contracted player and four franchise players. In addition, all teams would be required… Continue reading

The king of the Boston Wheelchair Marathon, South Africa’s Ernst van Dyk, was today denied an unprecedented 11th title by Switzerland’s Marcel Hug. In cold and windy conditions, the Swiss champion outraced the South African ace to claim his first Boston title.  Hug won in a time of 1:29:53 and finished over six minutes ahead of Van Dyk in a very slow race.  Van Dyk’s winning time last year was more than nine minutes faster! Participating in his 16th Boston Marathon, Van Dyk had to pull out all the stops to claim second place ahead of the Japanese duo of Masazumi Soejima and Kota Hokinoue. Afterwards Van Dyk said that he was satisfied with his second place because conditions were very tough.  He also congratulated Hug on having a great race. Van Dyk and most of the world’s top wheelchair athletes will once again be in action this weekend at… Continue reading

“Kids will grow up knowing they can be professional racers and make a living.” This was the reaction of South Africa’s champion wheelchair athlete, Ernst van Dyk, at a press conference yesterday in Boston where it was announced that all the World Marathon Majors (WMM) will have an official wheelchair section from next year. American pharmaceutical giant Abbott will be the official sponsor of the wheelchair sections of the WMM.  For the first time, a male and female winner will be determined over a twelve-month period based on scoring earned via results from six iconic global races.  Each will be awarded US$50,000. The Abbott WMM Wheelchair Series X is set to begin at the April 2016 Boston Marathon, which in 1975 became the first major international road race to recognize wheelchair participation.  Including each of the WMM in Tokyo, Boston,  London, Berlin, Chicago and New York Marathons, the… Continue reading