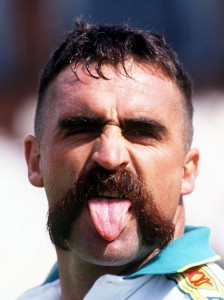 Aussie Merv Hughes once sledged a batsman: “Mate, if you turn the bat over, you’ll see the instructions on the back.”

On 4 January 2013 the New Zealand dressing-room at Newlands was a very sombre place.  The Proteas had just thrashed them inside three days by an innings and 27 runs.  It was, however, a turning point in the history of New Zealand cricket.  In the aftermath, captain Brendon McCullum and coach Mike Hesson had a “never and never again” moment and agreed on a set of principles of how they want the team to play.  The rest of the Black Caps bought into their plan and the duo has since led New Zealand to lofty heights.

A key principle of the McCullum / Hesson plan was that sledging would be totally taboo.  They will play hard, aggressive cricket but without resorting to any sort of verbal abuse of opposition players.  The approach has apparently served them well because it has taken New Zealand to a first ever World Cup final (in March this year) and last month their second ever drawn test series in England in almost 100 years.

Australia on the other hand are not only the newly crowned World Cup champions, they are also world champion sledgers.  Michael Clarke (captain) and Darren Lehmann (coach), however, have repeatedly denied that they have accepted sledging as a deliberate tactic to unsettle the opposition.

But on television evidence, Clarke and Lehmann certainly do nothing (or extremely little) to stop situations on the field getting out of control.  You don’t have to be a lip-reader to know that the likes of David Warner, Brad Haddin, Mitchell Johnson and Mitchell Starc regularly swear at opponents.  Clarke and Lehmann clearly tacitly approve and condone sledging.

Australia and New Zealand have very contrasting approached to sledging.  But then, would you rather sledge and have the World Cup, or play pretty cricket and have nothing to show for it?

Sledging has always been a part of the game and the history of cricket is steeped in wonderful anecdotes and quotations of sledging.  International cricketers will also tell you that many more stories of sledging will forever stay on the field.  All countries have employed it as tactic, not only Australia.

Unfortunately it would appear as if situations that boil over and personal attacks have become more common place.  The captain is best placed to put a stop to it but it also needs strong match officials (the two umpires and the match referee).  The players instinctively know when match officials are weak and will inevitably stretch the boundaries of acceptable behaviour.

Perhaps the time has arrived for the International Cricket Council (ICC) to take a tougher stance against serial sledgers.  But whatever measures the ICC puts in place it will be a after the fact.  It is primarily up to the international captains and coaches to create an environment where the game is played hard but fair.

England fast bowler James Anderson recently called on both sides to cut out sledging during the upcoming Ashes series between England and Australia.  The irony is that by making this public call, Anderson has set himself up for more sledging by the Aussies.  Clarke subsequently vaguely promised the series would be played in the “right spirit”.  It wasn’t a strong enough statement against sledging.  You know that the battle lines have been drawn.

The Ashes is the highest profile test cricket in the world.  There is no better platform for “the old enemies” to set an example to the rest.  But it needs Clarke, Lehmann, Alastair Cook (England captain) and Trevor Bayliss (England coach) to publicly state they will cut the on-field verbals to a minimum.  Will this ever happen?  Well, we live in hope…