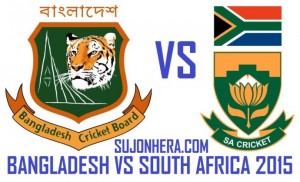 In many ways the 2019 CWC starts in Bangladesh during this tour.

The Proteas play Bangladesh at home in all three formats of the international game during July starting with a T20 international on the Sunday the 5th of July. This tour, especially the ODI series, will be their most difficult assignment in Bangladesh yet.

In recent times Bangladesh has shown that they are maturing into a force in international cricket. There is no doubt that they have gone past the once great West Indies as a cricketing nation. They enjoyed a very good 2015 Cricket World Cup (CWC) in Australia where they qualified for the quarter-finals.  Also, they recently easily beat Pakistan and India at home in ODI series. They have become a formidable team in ODI’s at home.

The Proteas have rested some key players, like AB de Villiers for the Test series and Dale Steyn and Vernon Philander for the ODI series.   The ODI squad, especially, will be tested, relying on a very inexperienced pace attack at this level and in sub-continent conditions. However, it is a good opportunity to start developing a new generation of bowlers for the future.

In many ways the 2019 CWC starts in Bangladesh during this tour. Cricket South Africa’s strategy needs to be to use the four years between CWC to build a team that will give the Proteas a realistic opportunity of success. The Proteas need to remain competitive between CWC but winning bilateral series must play a secondary role to building a CWC team.  Unlike Test cricket, where the strongest team needs to play all the time as it remains the pinnacle of the game.

The Test series being played without AB de Villiers will be challenging as he remains the best batsman in the team. Also, the Proteas need to find a replacement opener in Alviro Petersen’s place. Reeza Hendricks is the ideal opener with Stiaan van Zyl being allowed to build on the good start that he has made in international cricket in the middle order.

Spin will play a big role in the series and it will be interesting to see how the South Africans respond facing and bowling spin. The Proteas have still not settled on who their best spinner is. This series creates another opportunity to have a look at the spinners before the all-important home series against England later this year.

There is no doubt that Bangladesh remains a difficult place to tour and the improvement of their performances makes it even more challenging. After this tour the selectors will be wiser on many of the younger players as future internationals.