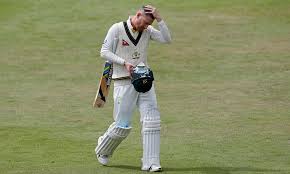 A well-trodden path for the Aussies…

England has easily won the Ashes before the final Test at the Oval against the predictions of many cricketing critics. The interesting point is that all four Tests have been won by big margins and not one has gone the distance. The third Test at Headingly was over in two days and if it was not for bad light the fourth Test at Trent Bridge would also have been over in two days.

Australia has consistently been dismissed for low scores that have affected their ability to compete in the series. They started the series with a problematic batting line-up but nobody expected it to be as exposed as it has been. After England’s defeat at Lords, the England Cricket Board instructed that the Test wickets must be prepared as typical English seaming wickets. This move not only negated any Australian aggression but also badly exposed their batting techniques.

Earlier this year Australia easily won the Cricket World Cup and no other team looked like competing with them in One-Day International (ODI) cricket during the World Cup. This raises the question, is the amount of ODI’S and T20 cricket that the Australians are playing not starting to affect the techniques of their current batsmen and also the young players they are producing?

Chris Rogers has been the most consistent Australian batsman in the Ashes and he has not played ODI cricket for Australia or in the Indian Premier League (IPL). Over the years he has played a lot of county cricket for Derbyshire and Middlesex. The rest of the batsmen play ODI cricket regularly and many of them have also spent a lot of time in India playing in the IPL and Champions’ League T20.

English Test batsmen on the other hand do not play in the IPL and start their season by playing for their counties in the Championship. Also, England normally plays two warm up Tests before a big series like the Ashes. There is no doubt that the English batmen were better prepared and have superior techniques against the seaming ball than the Australians have had during this current series.

This Ashes series has highlighted that the Australian players’ techniques have become flawed because of too much ODI cricket, the Big Bash and the IPL. They have been able to get away with it in Australia where the wickets in general are good for batting with pace and bounce but very little seam movement.

Australia will have to revisit their strategies to play Test cricket in England if they are to keep the great tradition of the Ashes competitive in England.