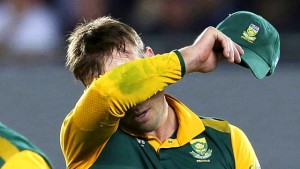 The Proteas were eliminated from the 2015 Cricket World Cup (CWC) by New Zealand in Auckland in an epic encounter that does justice to the great game of cricket and the CWC. This time the Proteas can’t be accused of choking, they weren’t even beaten; they were edged with one ball to spare.

The semi-final was their best performance in the tournament; unfortunately, it was just not enough against New Zealand who have been the team of the CWC to date. They still remain undefeated and if they win the final it would be an incredible achievement for a nation that is more rugby focussed.

However, if South Africa is ever to win a CWC, Cricket South Africa needs to learn some serious lessons out of this tournament. They need to get the selection of the squad right to give the management and team a realistic chance to win the coveted trophy. Of the fifteen players selected for the 2015 CWC, only twelve could be selected with confidence to play a role in the tournament.

The selection of Aaron Phangiso is the best example of this.  He never played a game, not even against the UAE in the last pool match, when the Proteas would and could only end second in Pool B. The selection of Farhaan Behardien confused the balance of the team as no one knew if he was an all-rounder or a batsman who could bowl when required. He just wasn’t good enough to be picked and became a journeyman who will be remembered for dropping a vital catch in the semi-final.

The selection of Wayne Parnell came back to haunt the Proteas as was expected. Once again he could not make a contribution.  As we saw against India on a wicket that had a bit in for seamers, he went for 92. That Ryan McLaren was left out for Parnell must be one of the worst CWC selections in history and cost the team. McLaren in 2013 and 2014 was the Proteas’ best ODI bowler and in 2014 he took the most wickets for a seam bowler in world cricket in ODI’s.

There has been a general consensus that the balance of the side cost the Proteas and this was caused directly by the selection of Parnell ahead of McLaren. The inclusion of Robin Peterson and McLaren would have strengthened the squad and had a positive impact on their chances.

If South Africa is to win a CWC in the years to come the administrators will have to ensure that the best teams are selected and prepared for the tournament, otherwise CWC glory will only remain a dream.