A year of two halves for the Proteas 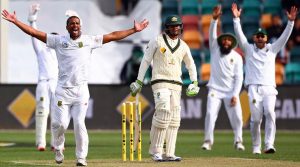 The Proteas enjoyed a year of two halves with the first eight months being difficult and having a dream finish to 2016.  The year started with the Proteas losing the Test series to England but with a bit of luck secured both the ODI and T20 series.

The World T20 in India once again proved a hurdle too far for the Proteas in ICC tournaments. They failed to reach the play-off stages of the tournament and also lost the T20 series to Australia in South Africa before the World T20.

During the middle of the year the Proteas visited the Caribbean to play in a Tri-nations tournament against Australia and the hosts, West Indies. The Proteas failed to make the final and had a poor tournament, winning only two games.

South Africa hosted New Zealand for a two-match Test tour in August and won the series with a good victory at Centurion Park in the second Test after the Kingsmead Test was drawn due to a wet outfield.

The New Zealand tour was the beginning of the Proteas turning around their performances and they finished the year on a high against Australia.

Australia sent a below par team to play the Proteas in a five-match ODI series and were whitewashed by a Protea team under a new captain playing with new found motivation and confidence. The Proteas then toured Australia and won the three-match Test series easily. South Africa has now won the last three Test series in Australia.

The Proteas ended the year in the top echelon of international cricket, finishing fourth in Tests, second in ODI’s and third in T20I’s on the ICC Rankings.

During 2017 the Proteas have inbound tours against Sri Lanka, Australia and India and away tours to New Zealand and England, across all formats of the game. They will use these tours to try and improve their ICC Rankings, especially in Test cricket.

The Champions Trophy takes place in England during their summer and this will give the Proteas another opportunity to lay to rest the ghost that has haunted them at ICC tournaments.

The Proteas will once again face the challenges that the international cricket treadmill brings. However, they enter 2017 as a more settled and confident team than they were at the start of 2016.