A world without context 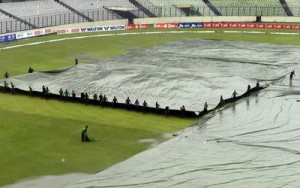 Why, oh why, would South Africa tour Bangladesh in July in the middle of the monsoon season? Picture: AFP PHOTO/MUNIR UZ ZAMAN

One of the International Cricket Council’s (ICC) hobby horses for many years was that if international tours or tournaments didn’t have a meaningful context, they had no place in the Future Tours Programme (FTP) and were to be avoided. On top of that, the generally accepted tenet was that such tours and tournaments were the ones most susceptible to match-fixing, and hence should be outlawed.

The FTP was far from perfect but at least there was some sort of a structure to international tours and tournaments. It offered context. Since the annexation of the game’s global finances by the ‘Big Three’ boards of India, England and Australia, the FTP has been abolished and with it any pretence of context. The Ashes, because of its history and tradition, and the ICC’s global tournaments are now the only international cricket with a semblance of context.

The FTP was dissolved because it didn’t suit the ‘Big Three’s’ financial agendas. Tours are now first organised according to what best suits their pockets and then the rest are left to fight for the scraps. Nothing illustrates this idiocy better than the Proteas’ recent tour of Bangladesh.

June to October is monsoon season in South Asia. And monsoon is synonymous with heavy rainfall. Approximately 80% of Bangladesh’s yearly rainfall will occur during this period.

By the end of the monsoon season, almost one third of the country is underwater. Good reason therefore not to play international cricket in Bangladesh over this period. Between 2005 and the Proteas’ tour, there were 27 international tours to Bangladesh by the other nine full members of the ICC. A quick glance of the dates of these tours reveals that in the last ten years –

a. No tour ended later than 19 June. That was the 2014 Indian tour. On this tour, the third and final ODI on the 19th was abandoned because of the weather and the second ODI, two days earlier, was severely weather curtailed and decided on the Duckworth / Lewis system.

b. No tour started earlier than 4 October. That was the 2013 New Zealand tour. On this day the tour was supposed to start with a 3-day warm-up game but the game was completely abandoned without a ball bowled.

c. No international tours to Bangladesh were scheduled between 19 June and 3 October. Why, oh why, then would South Africa tour Bangladesh in July in the middle of the monsoon season!? The last four days of the second and final Test match of the tour were completely rained out, making it one of the shortest Test matches in history in terms of balls bowled. The ludicrousness of the situation almost cost the Proteas their no.1 test ranking.

Then there is also New Zealand’s current tour of South Africa – slap, bang in the middle of winter! And what about the fact that since South Africa last played England in 2012 there have been no fewer than three Ashes series! All this while South Africa has been the No.1 ranked Test team. Has the Ashes not perhaps also sacrificed its context and significance?

The ‘Big Three’ have finally stripped international cricket of its context. Cricket is ruled by what will line their pockets and nothing else. Period. Only time will tell whether South African cricket can survive on the scraps.