A Lesson from a Basketball Star 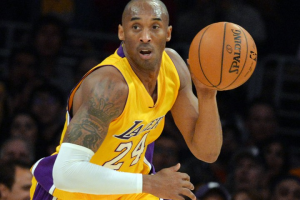 Kobe Bryant has reached a level of dedication and fitness that surpasses what many of us believe is possible. Photo: AFP/Getty Images

If not, here is a short CV: At age 37, Bryant is one of the all-time basketball greats. But for (literally) one month at the Charlotte Hornets, he has spent his whole professional career (from 1996) at the Los Angeles Lakers. Bryant is the cornerstone of the Lakers and has led them to five championship titles. He currently ranks third in professional basketball’s all-time scoring list. In 2006, Bryant scored 81 points in a single game, the second highest number of points scored in a game in the history of professional basketball. He has been named the sport’s Most Valuable Player on four occasions. At the 2008 and 2012 Olympics, Bryant won a gold medal as a member of the United States men’s basketball team.

Bryant is also one of the wealthiest sportsmen in the world. According to Forbes magazine, he is currently the tenth highest paid sportsperson in the world, earning US$23,5 million on his Lakers contract and US$26 million from endorsements. On Forbes’s list of celebrities, he is the 39th richest. The authoritative sport media website, SportsPro Media, regularly lists Bryant as one of the most marketable sportspersons in the world.

Bryant’s achievements and success, however, didn’t just happen. It is founded on an incredible work ethic.

When he was 12, Bryant went to a basketball summer camp. He did not score a single point on the entire camp. Then he learned about how another basketball all-time great, Michael Jordan, was dropped from his high school team. He learned how that motivated Jordan to outwork everyone around him and prove to them that he was worthy. This gave Bryant the belief that if he outworked everyone around him, just like Jordan did, he would be able to transform himself into a world-class basketball player.

So Bryant started to work… and he hasn’t stopped since. In high school, he would show up at 5am to practice and would not leave the school gym until 7pm. Every single day.

His work ethic didn’t stop when he left school. He continued to push himself even harder as a professional basketball player. He practises by himself, often without a ball, hours before his teammates show up. For 23 years he has forced himself to make 400 shots every single practice. Every day, even on game days, Bryant puts himself through four hours of intense workouts. He has completely cut out sugar from his diet.

Clearly, this man has reached a level of dedication and fitness that surpasses what many of us believe is possible. Cynics have called his discipline insane.

South Africa has a sports culture second to none. Given our historical imbalances, limited resources, geographical disadvantage and population size, we have performed incredibly well on the world stage. We do well, mainly, because we are so passionate about sport. But if that passion can be honed by just an iota of Bryant’s discipline, imagine what our country’s sportsmen and –women can still achieve.

(PS: Bryant’s iconic status is of course enhanced by the fact that he is a staunch Liverpool supporter!)