A Decade of the IPL 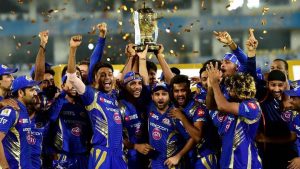 The IPL has become a unique event of Indian cricket.

Last weekend the Mumbai Indians and Rising Pune Supergiant brought the tenth edition of the Indian Premier League (IPL) to a thrilling close in Hyderabad.  The Mumbai Indians clinched their third IPL title in a nail-biting, one run victory.

After 10 years, it is time to give the IPL a critical look.  It is a great product, and one of the biggest and most popular professional sports leagues in the world.  No matter how solid this foundation is, it is inevitable that the modern, commercial trends will force the powers-that-be at the IPL to a crossroads from where future IPL’s can be steered in one of two directions:  A makeover or stick to a winning formula.

The IPL is a consumer product.  In the fickle world of consumer preferences, the key is to stay one ahead of the consumer.  That’s why mobile phone and technology companies keep offering new models with new features when one has barely got to know the latest model.  The marketing gurus will therefore tell the IPL that a makeover will ensure the tournament maintains its appeal and that its support base will not be eroded.  The temptation change for the sake of change will be huge.

On the other hand there are those who believe why change a winning formula?  The IPL is a unique event with a basically consistent formula:  An auction in February at which each of the eight teams must buy their international and Indian players, followed by the tournament in April/May each year of about 60 matches over a 6-week period.  Perhaps what the sports world need is consistency and not change…Perhaps consistency is what gives an international sports event longevity (think Super Bowl, FA Cup, Wimbledon, the US Masters, the Six Nations, etc.), and not change.

The other significant feature of the IPL is that it has assumed a distinctly Indian character, and rightly so.  It is after all a domestic, Indian cricket product aimed primarily at the Indian market.

At the risk of generalising, initially each team had two or three domestic players who were really bad.  That doesn’t exist anymore.  The Mumbai Indians’ triumph was solidly built on the performances of their domestic players, many of whom fans outside India have never heard of.  Ditto for some of the star performers in the seven other teams.  The international players and the stature of the IPL have definitely lifted the standard of the Indian domestic cricketer.  Could that be a factor behind the Indian national team’s stellar performances over the past two years..?

The IPL has become a global sports event with a distinctly Indian character.  It needs time and patience to cement its place on the global sports calendar but the pressures to “change with the times” might be irresistible.