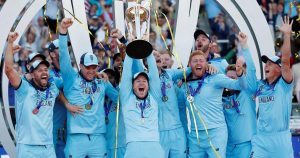 In one of my earlier columns at the start of the 2019 Cricket World Cup (CWC) I expressed the wish for seven weeks of unadulterated cricket enjoyment.  From Imran Tahir’s first over at the Oval to the Lord’s final’s manic ending, that wish came true (mostly).

From a cricketing point of view, this was the best CWC since 1992.  Even so, it wasn’t all hunky-dory, was it?  The bad moments for me all stem from the final:

And then the terrible:  South Africa.  We all knew the Proteas weren’t among the favourites, but did anyone foresee the speed with which they imploded?  Or as Zorba the Greek would’ve called it:  “Have you ever seen such a splendiferous crash?”  One commentator called it “mournful”; it was indeed.

South Africa’s losses to Bangladesh and New Zealand epitomized their entire campaign.  The Tigers, who were beaten in a very one-sided series in South Africa 18 months ago, completely outplayed the Proteas in every department.  The game against the Black Caps is a study in how to snatch defeat from the jaws of victory.

But it was such a wonderful CWC that I don’t want to end this piece on a negative note.  Here are some of random moments that will live long with me:  Starc’s sensational yorker to dismiss Ben Stokes at Lord’s.  Jimmy Neesham’s outrageous one-hand catch to dismiss Dinesh Karthik in the semi-final.  Boult stepping on the rope at long-on in the final.  Two pieces of brilliance from Martin Guptill – the direct-hit run-out of MS Dhoni in the semi-final and the catch at leg gully off a full-blooded Steve Smith pull.  Kane Williamson’s captaincy when he brought on Colin de Grandhomme in the final. (Who would’ve thought De Grandhomme would be the best bowler in the final?)  Carlos Brathwaite against New Zealand – simply breathless.  The incredible Shakib al Hassan:  The third most runs (606) at the tournament’s highest average (86.57) and joint second most wickets among spinners (11).  Nobody in the history of the CWC has ever taken more than ten wickets and scored more than 400 runs.

They say football is the beautiful game.  After the 2019 CWC I might disagree.