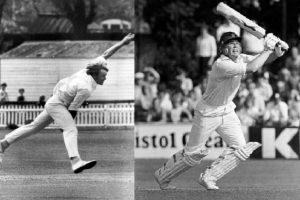 Mike Procter and other South Africans have made a huge impact on county cricket.

The year 2018 is important in the history of the overseas professional in English county cricket:  It is 50 years since the England County Cricket Board (ECCB, predecessor of the current ECB – England & Wales Cricket Board) decided to relax the rules on residential qualification for professional players and heralded in the era of the overseas pro.

Up to 1968 overseas players were not completely unknown in county cricket. But the intrepid souls who ventured into the pre-1968, stiff upper-lip world of county cricket had to negotiate complex rules regarding residential qualification.  It was easier to get into club cricket and at the time an equally reliable source of income.

But in 1968 Nottinghamshire wanted the world’s premier cricket, Garry Sobers, to play for them – and Sobers dearly wanted to come.  It was an opportunity not even the conservative ECCB could let go.  They agreed to Nottinghamshire’s proposal that the rules governing overseas professionals be relaxed and allowed each county in the Championship competition to appoint one overseas professional.

But of all these eras it is the players from the third era, beginning in 1968, which would become the true pioneers of the overseas pro in county cricket.  Hot on Sobers’s heels came the cream of world cricket – great players beginning associations with counties that would run deep, nailing their names into the history of the English domestic game.

The third era was further shaped by two forces, one from South Africa and the other from the West Indies.

South Africa’s expulsion from international cricket in 1970 meant that a whole generation of players, with Barry Richards and Mike Procter at the forefront, would find county cricket as the only stage for their prodigious talents.  County cricket would undoubtedly have been the poorer if Richards and Procter never went to Hampshire and Gloucestershire (or should I say “Proctershire”) respectively.  Ditto for Eddie Barlow at Derbyshire (and later Peter Kirsten at the same county), Clive Rice at Nottinghamshire, Lee Irvine and Kenny McEwan at Essex, Garth le Roux at Sussex, Vincent van der Bijl at Middlesex, Jimmy Cook at Somerset, Stephen Jefferies at Lancashire.  The list goes on and on…

The extraordinary proliferation of West Indian talent post-1968, which coincided with their rise under Clive Lloyd, also happened to coincide with exposure to full seasons of county cricket.  Not only would the greats of their Test teams – Rohan Kanhai, Lloyd, Alvin Kallicharran, Gordon Greenidge, Viv Richards, Andy Roberts, Joel Garner, Michael Holding, Desmond Haynes (another endless list) –  enrich life in England, so would some formidable cricketers that could barely get a game in the national side.  Sylvester Clarke, who took almost a thousand first-class wickets at less than 20 but played only 11 Tests, and Wayne Daniel, who took 867 wickets at 22.47 but played just 10 Test, were county cricket superstars.

Add to this mix the likes of Imran Khan at Sussex (what a formidable new-ball partnership he must’ve had with Le Roux) and Richard Hadlee at Nottinghamshire (I wonder if any team in the world will ever a better allrounder combination than Hadlee/Rice) and it becomes clear that 1968 ushered in the halcyon days of the overseas pro in county cricket.